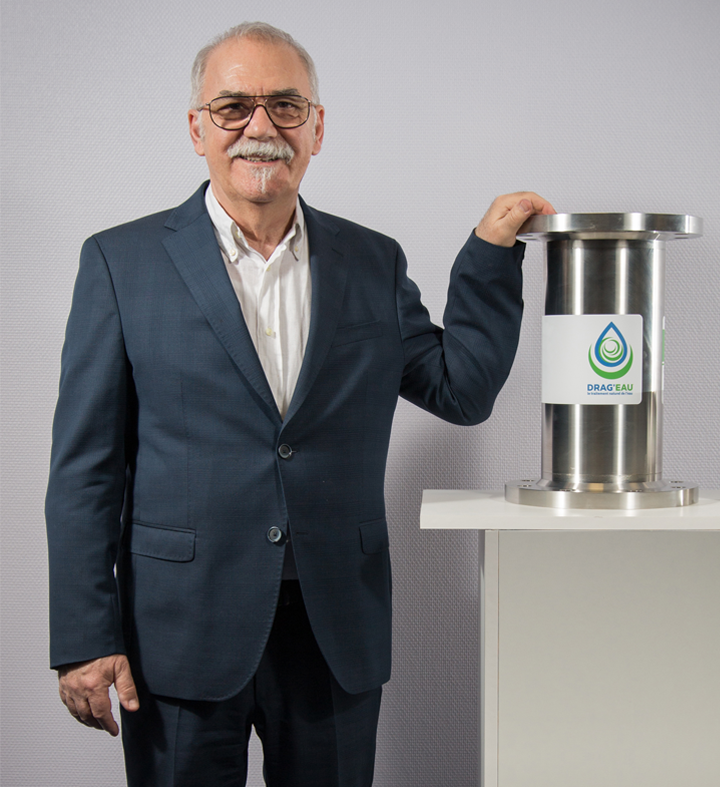 The atypical career of Mr. Jean Drago, makes him a very original character in this great world of industry and business. Indeed, he has not always been the entrepreneur that we know to date. Coming from a modest background, he worked like all the sons of the first waves of Italian immigrants, on construction sites before becoming a professional musician. It was behind a battery that Mr. Drago built his first career with several groups and albums to his credit. Then fate led him to change direction more than 25 years ago and he opened up to business with great success from his first professional experiences. Self-taught, he decides to create his first company. The treatment of water becomes obvious to him. Indeed, already at that time, issues related to the environment and the health of our children were one of his concerns. And it is only natural that, starting from a small structure where he launched himself on this market of ecological water treatment, (very little developed at that time) that he became manager of the Drag ‘group. water, with its own range of products distributed all over the world !!!

Since the creation of our company in 2011, we are the specialist in the treatment of physical and ecological water at the heart of two activities: the anti-limescale treatment of water pipes as well as the sludge removal of “closed” network systems (heating / air conditioner). Here are a few words of the events that marked our adventure

Reach out to us anytime and lets create a better future for all technology users together, forever. We are open to all types of collab offers and tons more.

Monday-Friday: 9am to 5pm,
Saturday: 10am to 2pm
7300-73 Colonial Rd, Brooklyn,
NY 11209, USA
+(123)123-456-7890
+(123)123-456-7890
info@drageau-international.com
info@drageau-international.com
We use cookies on our website to give you the most relevant experience by remembering your preferences and repeat visits. By clicking “Accept”, you consent to the use of ALL the cookies.
Cookie settingsACCEPT
Manage consent

This website uses cookies to improve your experience while you navigate through the website. Out of these, the cookies that are categorized as necessary are stored on your browser as they are essential for the working of basic functionalities of the website. We also use third-party cookies that help us analyze and understand how you use this website. These cookies will be stored in your browser only with your consent. You also have the option to opt-out of these cookies. But opting out of some of these cookies may affect your browsing experience.
Necessary Always Enabled

Performance cookies are used to understand and analyze the key performance indexes of the website which helps in delivering a better user experience for the visitors.

Analytical cookies are used to understand how visitors interact with the website. These cookies help provide information on metrics the number of visitors, bounce rate, traffic source, etc.

Advertisement cookies are used to provide visitors with relevant ads and marketing campaigns. These cookies track visitors across websites and collect information to provide customized ads.

Other uncategorized cookies are those that are being analyzed and have not been classified into a category as yet.